Having just completed the week long kickoff to our fun-employment: celebrating in Maui with family, we are officially on the road and excited for you all to join! With most international flights departing out of Honolulu, we made our way across the water from Kahului and enjoyed one night on Waikiki before heading to the airport to embark on our international excursion.

When we first realized that we would have a hefty 17 hour layover in South Korea, we briefly researched our options as we remembered while travelling through China en-route to Nepal last year, China Southern Airlines hooked us up with a 24 hour tourist visa, complimentary hotel room and breakfast for our 9 hour layover. 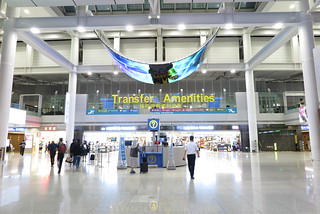 We soon found out that even though we would not have a complimentary stay outside of the airport, there are a plethora of ways to enjoy your time inside or outside the airport: all incredibly affordable, rich with culture and exciting! 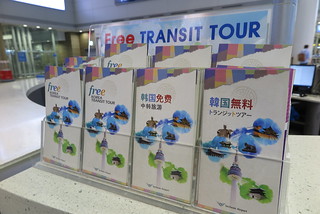 The first option that we discovered was that Visit Korea offers amazing tours of Seoul and the surrounding neighborhoods for those who are en-route to their next destination – complimentary (with the exception of the Seoul City Tour 1 and 3, which only  cost $10 as it includes a meal and entrance to the Royal Palace). Depending on the length of stay before your connecting flight, there are short 1 hour tours (Yonggungsa Temple Tour) and even an entire Seoul City Tour lasting upwards of 5 hours! If your time between flights is within those two options, they even have a 3 hour tour which takes you to explore the Gwang myeong Cave, an old gold mine that was closed in 1972. Had our plane landed within the time frames that they run the tours (starting around 7:00 AM ending at 6:00 PM), we would have loved to see these incredibly affordable highlights! 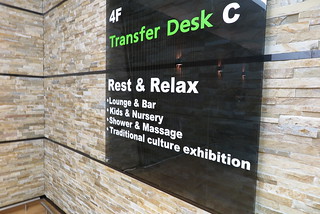 For those connecting within Asiana, the wonderfully helpful staff at the Transit desk will assist you with a 24 hour tourist visa, transportation and reservations for local complimentary accommodations.

If you are unable to leave the airport, or land once the tours have completed for the day and have no desire to go through customs, there are still many options within the airport for you to enjoy a comfortable stay. Dam and I, having 17 hours to kill, had initially planned on exploring the city, however Incheon is quite some distance from Seoul’s city center and sometimes takes up to 2 hours to get into the city. Plus, with being “fun-employed” and having a desire to show options for budget-friendly travel, we opted to explore the airport… which we were so glad that we did!

Within the airport, the first thing to notice is the vast amount of high-end shopping one can enjoy duty free. If you are on the hunt for a Hermes handbag, premier liquor or even cosmetics, Incheon has an entire wing of the airport, ground level, that certainly does not disappoint. Obviously, these lavish luxury brands do not fit within our backpacker budget or lifestyle, so we stuck with some brief window shopping on our walk throughout the concourse.

Being exhausted from the early departure out of Honolulu as well as a sleepless 10 hour flight to Incheon, we explored the multilevel Asiana Airlines wing in search of a comfortable place to call home for the night. On the second floor of the airport, we discovered a row of first class and premier lounges, as well as other transit amenities. We walked by the Asiana first class lounge, looking swankier than ever, as well as multiple other lounges which you could pay a nominal fee (approximately $40) to enjoy. Towards the end of the wing, we found a comfortable transit lounge, operated by Sheraton, offering guestrooms for hire ranging from $50-90 for 6 hours. Due to our late arrival, by the time we inquired about the cost for the night, only one double room remained vacant and was more than we wanted to spend: $180 for 12 hours. 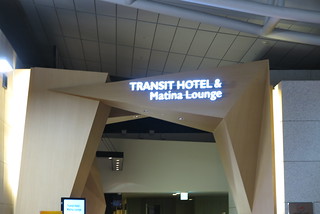 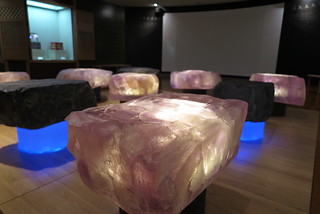 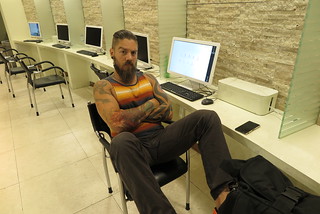 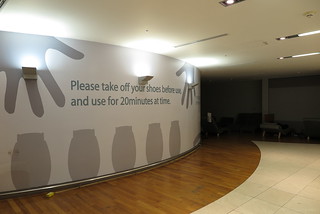 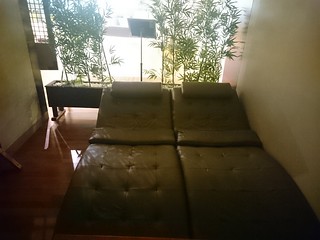 We started walking back towards the main terminal when we stumbled upon the perfect serene spot away from the massive crowds of tourists gathering below hunting for luxury goods. In the middle of the secluded wing, not only did we come upon a Korean cultural center but also a computer lab (the computers being in both in English and Korean and incredibly user friendly), electronic charging station as well as reclined chairs in a dim lit rest area, all complimentary to use. With shoes off, we explored the rest area to find about 25 reclining chairs separated by small wooden walls for privacy. Though the sign on the wall stated we could only occupy the area for 20 minute intervals, come bed time, each bed/chair was full as we all snuggled in for at least a few hours of uninterrupted sleep. 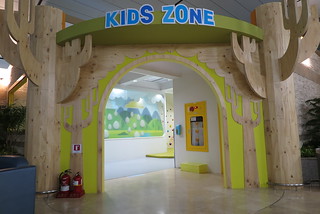 Across the walkway from the rest area was the kid’s play room which includes some bouncing mats and even a rock climbing wall! 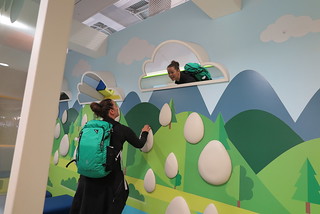 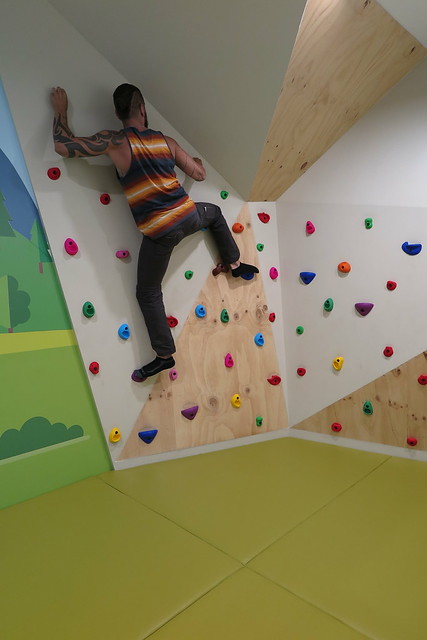 The quiet Korean cultural center, next to the rest area, showed films about the history of Korea and had various art pieces and sculptures on display. The soft lit stones in the middle of the floor made for both a beautiful ambiance and quaint seating arrangement to enjoy the engaging and scenic films. They also offered a complimentary interactive photo booth where we took photos of ourselves “visiting” local heritage sites and temples. 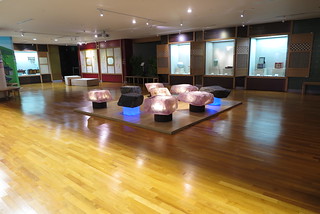 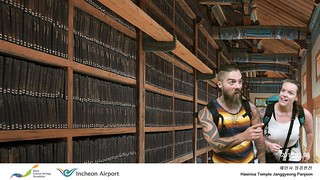 On the main level where the shopping is located is also the “food court”. Ranging from western style food (Quizno’s, Taco Bell and Jamba Juice) to Japanese Udon, Sushi restaurants to authentic and local Korean Bibimbap, they had it all. Around 7pm, the floor was bustling with business travellers, students and the occasional westerner: dining together within elbow’s reach. Dam and I each ordered Bulgogi Bibimbap, which was far superior to any we had previously enjoyed in Seattle. The minced meat paired with vegetables and rice was incredibly flavorful but the star of the meal was the Kimchi. With just the right amount of spice and crunch, we gobbled it up quick. 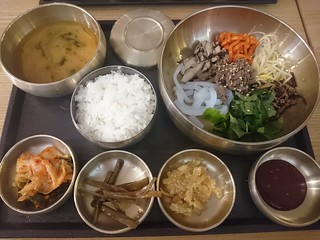 After dinner, we took another long walk through the concourse and ended with a dragon fruit mango smoothie. By the time we made it back to the rest area, it was creeping close to 8:30 PM and our eyelids becoming increasingly heavy. We found a secluded spot in the back corner and nestled in for the next 7 hours. The sounds of mutually weary travellers lulled us to sleep, with the occasional alarm reminding us we too were waiting for our our next flight to depart.

Feeling much more rested having snoozed for about 7 hours, we were back into exploration mode. What we had not noticed earlier on our walk was the complimentary shower facility for travellers as well as massage parlor – another way to pass the time! Incheon truly had it all – we could live quite comfortably in this airport terminal! 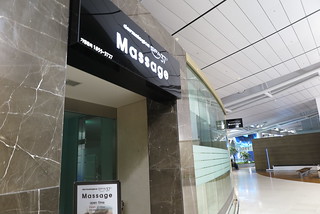 We continued down a floor in search of coffee and breakfast, deciding to enjoy one last Bulgogi Bibimbap prior to our departure. The early morning bibimbap was slightly different than what we had enjoyed the previous night, this one to include more seaweed and bean sprout soup instead of a soybean soup, similar to Japanese Miso.

After filming a quick video about our layover, we set out to find the gate to our connecting flight, located in a separate concourse only accessible by an underground train which runs approximately every 7 minutes. 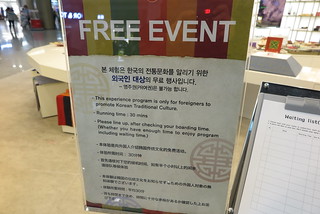 On our way to the train, the shops began to open and an excess of travellers were beginning to reappear and fill the walkways. We walked past another Korean cultural center and were invited to participate in a free art class teaching how to make Hanji – a traditional Korean handmade paper from the bark of mulberry trees. Beautifully clad in traditional wear, the young Korean women cheerfully invited us to participate in a 30 minutes craft making Hanji bowls which we could take with. We were shown how to properly glue the mulberry paper to an already constructed bowl, using a giant paintbrush and glue made from potato starch. At 7:30 AM, we enjoyed the relaxing start of our day, pasting sticky pieces of intricately colored paper to the only bowls we now owned, our newest “prized possessions”. Though I completed my bowl first, Dam took the gold medal on paper pasting, as each of his corners were securely fastened and bonded well. 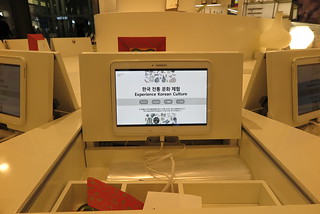 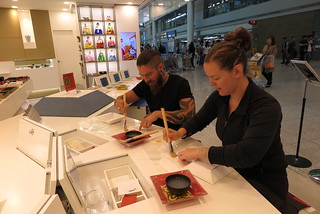 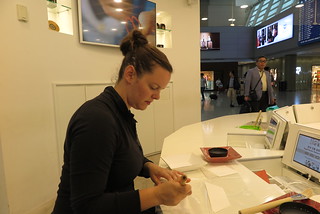 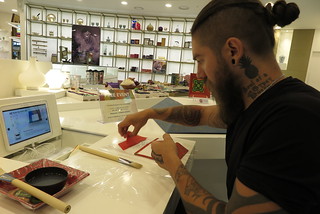 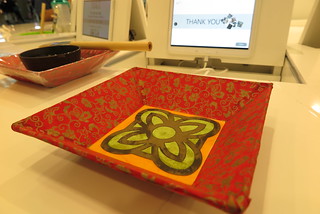 We quickly wrapped up our art projects, headed towards our gate and excitedly anticipated what awaited us in our next destination: Thailand.